Wind power is one of the cleanest and safest methods of generating renewable energy. Due to the steady increase in price of nonrenewable sources, wind turbine use has increased 25% in the past decade.i While its growth has helped reduce carbon emissions and pollution, this green source of energy comes at a cost: these massive blades, slicing the air at close to 200 miles per hour, serve as giant death traps to migrating birds and bats.

According to a study in the Wildlife Society Bulletin, wind turbines kill 573,000 birds and 888,000 bats annually.ii Some scientists theorize swarms of migrating birds and bats are attracted to the turbines’ height, mistaking them for tall trees, or that the spinning blades confuse the bats’ biological sonar.iii

Bird-X explores why saving these animals is important, and how humane pest control can help mitigate the high number of bird and bat deaths caused by wind turbines by deterring the animals away from an area safely. 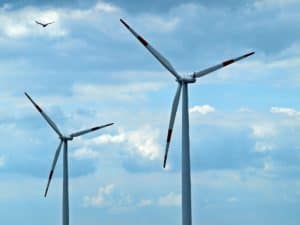 Spinning wind turbines create quite the hazard for birds and bats!

As concerns escalate about mosquito-borne illnesses like the Zika virus, experts point out that a single bat can consume as many as 1,000 mosquitoes in an hour, according to the U.S. Forest Service.iv A bat colony can take out up to tens of thousands of mosquitos in a night.

Bats also prey on insects that feed on crops, saving the U.S. agriculture industry more than $3 billion a year in pesticide costs, according to a Boston University study.v Not only do bats control flying insects, they also pollinate commercial crops, flowers, and various cacti. “I cannot think of another mammal that does more for people in terms of pest control and pollinating plants,” one Duke Energy biologist, Tim Hayes, says in a statement.vi 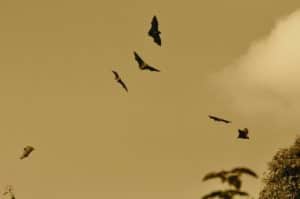 Critics of wind energy point out that turbines pose a threat to many federally-protected species—most notably Golden Eagles. In 2013, the U.S. government fined Duke Energy $1 million for a number of bird strikes that occurred at their wind farms in Wyoming.vii Any means of deterring birds and bats from approaching wind turbines may reduce fatalities, and protect farmers and wind energy companies from hefty fines. Bird-X offers bird and pest control products that are extremely effective, safe, humane, and eco-friendly—while avoiding the use of dangerous poisons and traps. Implementing Bird-X solutions reduces health and liability risks, which ultimately saves time and money.

For wind farms and other green energy facilities, Bird-X affirms the best method for deterring pest birds and bats is to create an environment that is not conducive for them to live. Using a combination of humane pest control products, like Bird-X’s bird netting, laser bird control, or visual scares, along with sonic and ultrasonic methods such as the Mega Blaster PRO or BroadBand PRO can lead to a more successful pest deterrent strategy. Bird netting completely blocks birds and bats from entering an area, while solutions like visual scares and lasers scare pests away. Using these types of deterrents in combination with the Mega Blaster PRO, a powerful sonic bird control system that broadcasts irritating, alarming, intermittent distress calls that frighten birds away, or BroadBand PRO, a multifaceted deterrent that emits both ultrasonic and sonic sounds to confuse, disorient, and ultimately repel pests, can ensure successful results. Over time, these methods condition birds and bats to avoid an area.

Bird-X solutions mimic threats or create physical barriers so that pest birds and animals think an area in unsafe. Over time, pests are conditioned to avoid an area where this threat is perceived, seeking refuge elsewhere. The Chicago-based company has been developing humane, sustainable ways to manage bird and pest problems for over 50 years, and is dedicated to working with clients to find the best and most cost-effective solutions to control unwanted pests.

If your farm or green energy facility would benefit from Bird-X’s humane pest control products, let us know in the comments! For more information on bird and pest control for outdoor areas, please visit Bird-X’s Outdoor Pest Control page.

Birds Are Not the Only Carriers of Avian Influenza Coyote Control: How Urban Coyotes Are Invading Our Cities
Scroll to top