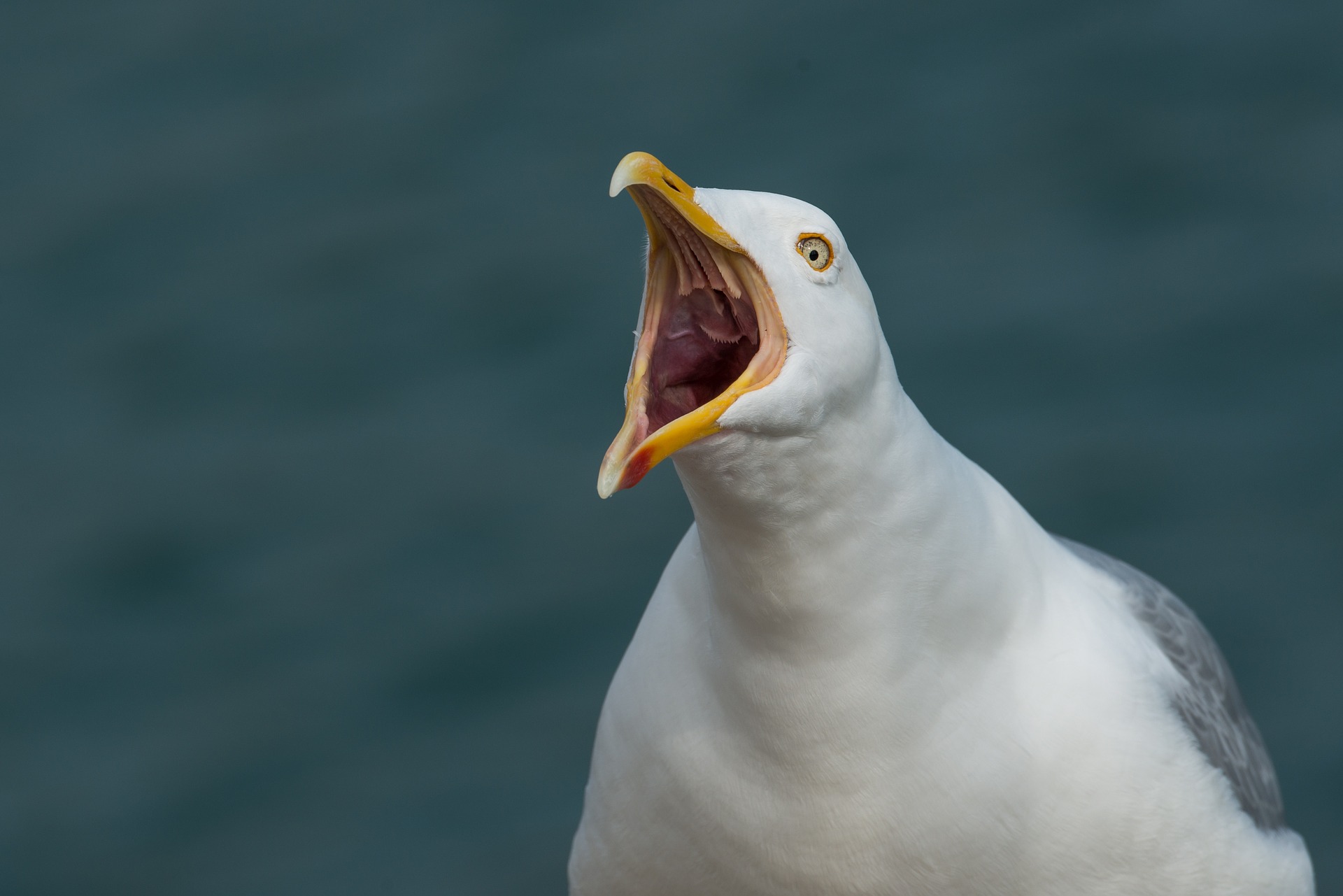 The Rhode Island Resource Recovery Corporation (RIRRC) is not only the largest landfill in the state of Rhode Island; it’s also the only one. In earlier days, each city and town in the state had its own landfill operation. These multiple facilities tended to be inefficient, inconsistent and duplicative, besides resulting in a plethora of unbeautiful garbage dumps around the state.

So the state took an unusual step: It legislated a quasi-public corporation to create one central landfill to serve all 39 cities and towns in Rhode Island. The state gave the RIRRC start-up funding, after which the corporation had to generate its own funds through commercial, residential and municipal contracts. Trucks now come every day from all over the state to tip their loads at the central site. No hazardous waste or out of state waste is permitted.

Whose Territory Is It?

While centralization effectively solved a major collection problem, it created a new issue. “We have one of the largest landfills on the East Coast,” notes Bill Jasparro, Physical Plant Manager for the RIRRC, “with an average of 750 trucks per day tipping approximately 4,000 tons of solid waste at this site. Thousands and thousands of gulls follow the trucks into the dumping area to feast on anything they can get their beaks on,” he says.

“We have everything right here that gulls crave—ponds of water and all kinds of foodstuffs in nearly endless supply. Some of these gulls have never seen the sea,” Jasparro quips.

Various species of gulls nest, raise their broods, and litter the area with unsightly droppings—splattering walkways, parking lots, and the windows of RIRRC’s many buildings clustered on 1,200 acres. “These gulls are so well-fed and healthy that their droppings are gigantic,” Jasparro attests. “It goes with the landfill business,” he says.

“There’s new garbage every day, and the gulls stick around for easy pickings in the open arena where the trucks tip into our facilities.” Whatever they can grab is fair game. Throughout the day, they’re digesting the food and doing what comes naturally,” he says. “And the mess they deposit on public surfaces and cars—and on one unlucky inspector—is intolerable.”

“We know we can’t totally eliminate the gulls,” Jasparro explains, “but we need to control them.”

A federal and state regulation permits the RIRRC to kill 500 gulls annually, which helps a little, but hardly puts a dent in the overall population of thousands upon thousands. And they’re multiplying.

“We tried many approaches,” notes Jasparro, who has been with the RIRRC for eight years. Disruption techniques covered the gamut. “We used Screamers,” Jasparro says, “which are like firecrackers. It scared off the gulls, but only temporarily.” The same fate befell the “Bangers” they tried. “It’s like shells going off,” Jasparro explains. “Before I joined the RIRRC, my predecessor used tuna line—a kind of thick wire fish line—stringing it on all the high ridges and peaks of the landfill facilities and crisscrossing the flats in a grid formation. Gulls need a path for landing and taking off, so the grid helped prevent them from landing. But,” he adds, “if the wire breaks, the preventive effect is lost.” Subject to weather and wind, wires break frequently, leaving the space unprotected.

“Our goal is to keep a clean environment for people coming to, and working at, the facility,” Chairman A. Austin Ferland continues. “We plant flowers in the summer and try to keep the area pleasant for our employees, our corporate commissioners and visitors. Gulls were raining on our parade,” he laments.

That’s when Bill Jasparro read about a new bird deterrent device made by Bird-X, Inc., a Chicago-based company long known for its success in the field of bird control. “While looking through trade publications about two years ago, I read about the research Bird-X had conducted in developing its high-tech, electronic bird repeller. So I thought, why not give it a try?”

Jasparro phoned Bird-X and spoke with Joshua Sirt, one of the company’s technical consultants. “Josh said to me: ‘I think I can solve your bird problem. Try the BroadBand PRO unit for three weeks. If we can’t help you reduce the gull population, we’ll take the unit back,’ he promised.”

Josh says that the sonic technology behind the BroadBand PRO is unusual. The unit not only emits distress cries that signal danger to gulls (and pigeons and starlings and others), but also produces predator cries like hawks and falcons, plus a random combination of threatening sounds, varying frequencies and volumes that add up to all-encompassing harassment. Birds are repelled by the ongoing commotion.

Bird-X did more than promise results, Jasparro recalls. “Josh told me he’d send exact instructions for installing the BroadBand PRO and its four speakers where the concentration of birds was the worst. And he said he’d send visual devices to support the unit.” Jasparro was surprised to hear that the package Josh put together would effectively provide 10,000 square feet of bird-discouraging coverage.

Jasparro remembers the day that the big box arrived from Bird-X. Along with the BroadBand PRO unit, Jasparro pulled out a big inflatable balloon called “Terror Eyes” and another prop called “Prowler Owl” —a floppy fabricated owl on a stand.

Disappointed, amused and somewhat exasperated, Jasparro exclaimed to his boss, “This is a joke. This will never work.” But at this point, he had nothing to lose. “I remembered what Josh said, ‘If it doesn’t work, return it.’” So Jasparro proceeded anyway.

“I was leery,” Jasparro freely admits. “We installed the BroadBand PRO outside, on top of the roof of our tripping floor facility, which is 180 feet by 350 feet. I sat back and waited,” he says. So did his boss.

When a gull actually perched on top of the unit, Jasparro called Josh to express his disappointment. “Josh said to give it time. He explained to me that some gulls are deaf and don’t hear the unit, and how the unit sends out some of its waves on frequencies that give birds a headache and they go away.” Josh seemed to be an expert on the subject, so Jasparro set aside his doubts and followed Josh’s recommendations for tweaking the unit’s settings for volume, frequency and varieties of predator’s calls.

“Within two weeks, we had major positive results,” Jasparro reports. “I was 99% satisfied, and I remain 99% satisfied. While the unit doesn’t eliminate the gulls, it keeps most of them away from people-sensitive areas,” Jasparro says. As a bonus, the RIRRC now saves $700 several times a year, having reduced the necessity of frequent outside window washings.

“The BroadBand unit kept the birds away to such an extent that I purchased two more units,” he says. With a total of 12 facilities on RIRRC’s 1200-acre landfill site to choose from, one new unit will be placed on the administrative building so his boss’s windows will no longer be streaked with gull glop. Another new BroadBand PRO unit is destined for the new RIRRC Recovermat Facility, which has already been invaded by gulls.

“The BroadBand unit does work,” Jasparro repeats. “For the price, you can’t go wrong.” He has already recommended the unit to others with serious bird problems. “It’s not a cure-all,” he adds, “but it does keep the birds at bay.”

Also, he cautions, “The supplementary visual devices help, but they really must be used in conjunction with the BroadBand PRO.”

Bird-X’s Josh Sirt agrees and adds another tip. “Over time,” he says, “birds may get accustomed to the sound effects, so you’ll want to vary the settings occasionally.” This technique has kept the gulls at bay for the Rhode Island Resource Recovery Corporation for two years and counting.

“I had one other concern,” Jasparro recalls. “When we first activated the unit, I thought the predator cries might echo into the residential neighborhood at night.” If so, there would probably be an outcry from the neighbors. But Jasparro received NO complaints. “It’s not bothering anyone but the gulls,” he says in triumph. “As Physical Plant Manager, I’m patrolling the gulls to the best of my ability in key areas,” he concludes. 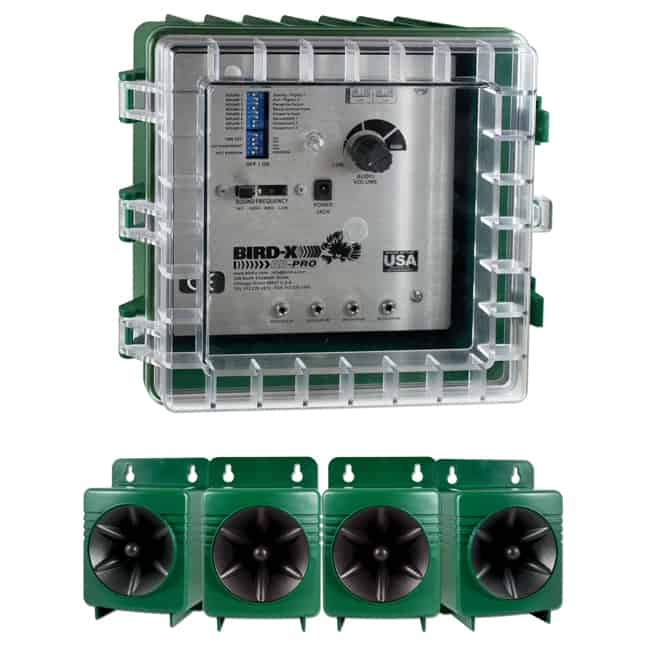